Figure 1. Accessing the Explore Projections functionality from the top menu.

With the Detailed Projections interface, you can define the Climate Futures matrix according to any two climate variables and any season of your choosing. You can also populate the matrix with the individual projected change results from each model and compare them to the multi-model average or the other individual models. 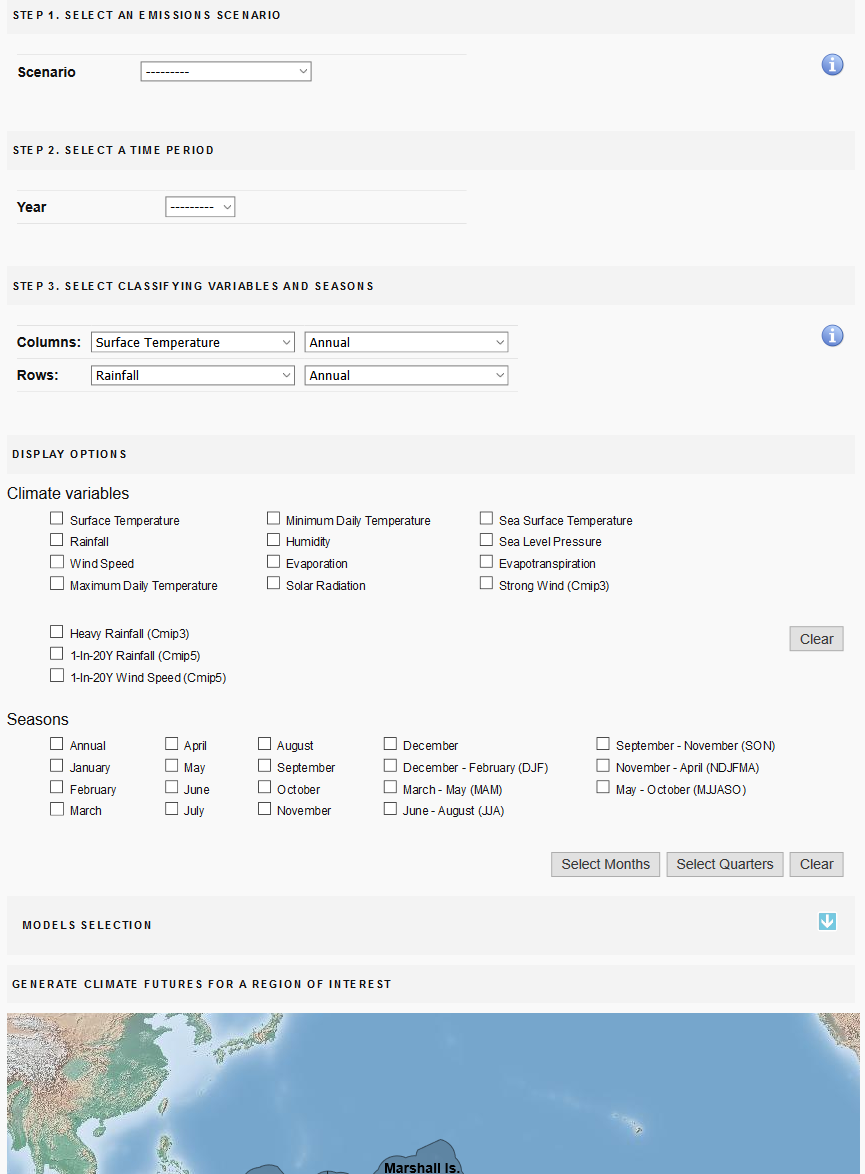 In addition to the settings described previously, the Detailed Projections landing page has the following settings.

Setting the Classifying Variables and Seasons

Two climate variables are required to generate the projected climate futures. By default, Surface Temperature and Rainfall are used. There are 11 variables to choose from:

These features are described in detail in the following sections (apart from those features already described). 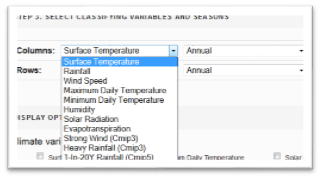 Note: “Strong” and “Heavy” are defined as the 99th percentile, i.e. the heaviest 1% of events. These variables are only available from the older CMIP3 models. See the Glossary of Terms for a detailed description of the climate variables or click the little blue information button

For each climate variable a season can be selected. You have the following options to choose from:

In order to change the default value (annual) just click on the little arrows on the drop down menu o show the seasons available and click on your choice (Figure 4). 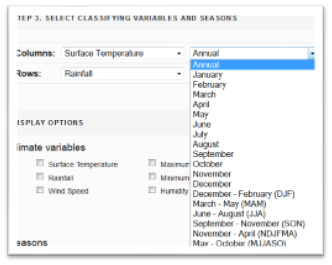 Seasonal “climate futures” provide more information about when the largest and smallest changes are likely to occur. In some cases, little change in the annual average can mask large compensating increases and decreases in particular seasons. This can be important for activities in which the timing of climatic events is critical, such as planting or harvesting crops.

There are several display options that result in a more detailed output and the chance to decide which of the models should be included in generating “climate futures” for a region of interest.

Once all input variables are selected, click on a region of interest on the map to create and explore its “climate futures”. Like in Intermediate Mode, the results are displayed in a (more detailed) Climate Futures Matrix. The Advanced Mode allows you to narrow down the range of climate projections for specific applications and facilitates the process of choosing climate models appropriate for a designated impact assessment.

Table 1 : Appropriate variables to use with each of the three most commonly used Classifying Variables. Variables marked with an asterisk (*) will not always be correlated.

It is important to note, however, that the variables, Heavy Rainfall and Strong Wind will not always be well correlated with Rainfall and Wind Speed, respectively. The nature of the relationship between these variables can be investigated with the climate futures matrix. For example, to investigate the relationship between Wind Speed and Strong Wind, set these two variables as the Classifying Variables and examine the resultant matrix. If there is a tendency for Strong Wind to increase or decrease as Wind Speed increases, there is a correlation. However, if changes in one variable generally correspond to little or no change in the other, there is little or no correlation.

Figure 5. Display options to set detailed data to be generated

You can also choose a corresponding season of interest. Detailed data are available for the whole year, individual months, as well as December-February, March-May, June-August, September-November, November-April and May-October.

Select which climate models to exclude if necessary

The PCCSP and PACCSAP programmes undertook extensive evaluation of the global climate models used in the Fourth and Fifth Assessment Reports of the Intergovernmental Panel on Climate Change (IPCC). The models were carefully assessed to see how well they reflect past and current conditions, such as how each model reproduces the El Niño Southern Oscillation in the Pacific region. As a result of this evaluation, seven models (six CMIP3, one CMIP5) were considered unsuitable for use in climate projections over the PCCSP/PACCSAP region, leaving 18 CMIP3 and more than 45 CMIP5 models for use in Pacific Climate Futures.

By default, all models are selected. To exclude one or more models from the projections, click the

expand button to display the model selection panel (Figure 6). Individual models can be de-selected by clicking on the tick-boxes to remove the tick.

Important note: Models should only be excluded if there are good reasons to do so. For example, some of the models perform poorly in certain countries. When generating projections for these countries, it may be desirable to exclude them. In general though, the climate futures matrix should be generated with as many models as possible to ensure the full range of possible climate futures is shown.

Excluded models can be re-included by clicking the tick-boxes again. Information about the climate model can also be obtained by clicking on the model name. 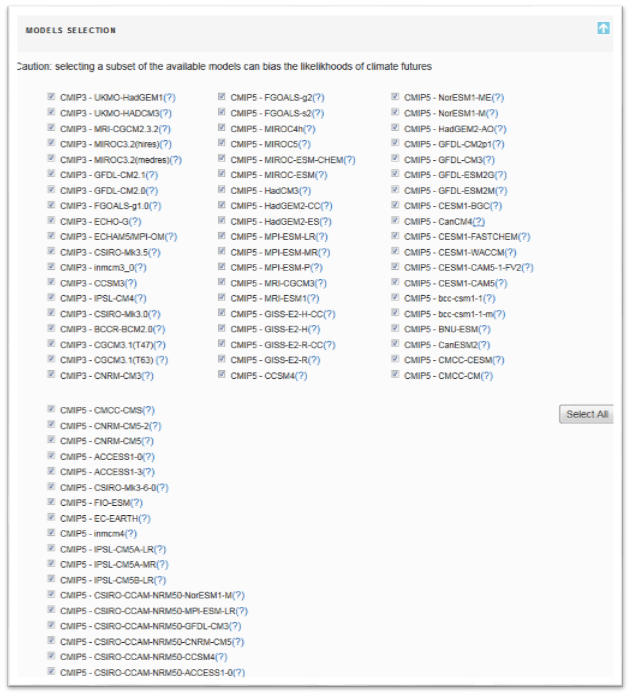 Once the above settings have been selected, you can generate “climate futures” for your region of interest. Just click on a region on the map. The Climate Futures Matrix will then be displayed.

As described earlier (see The Climate Futures Matrix) matrix shows projected climate futures for the chosen time period, emissions scenario and the two classifying climate variables averaged over the region of interest. The cells of the matrix can be expanded by clicking on the + symbol in the top right corner of each cell (Figure 7). This reveals results for each model as well as some basic summary statistics for the cell. It is important to understand that the change values displayed are a 20-year average projected change relative to the 20-year period centred on the chosen baseline (or reference) period (see Accessing and Setting User Preferences). 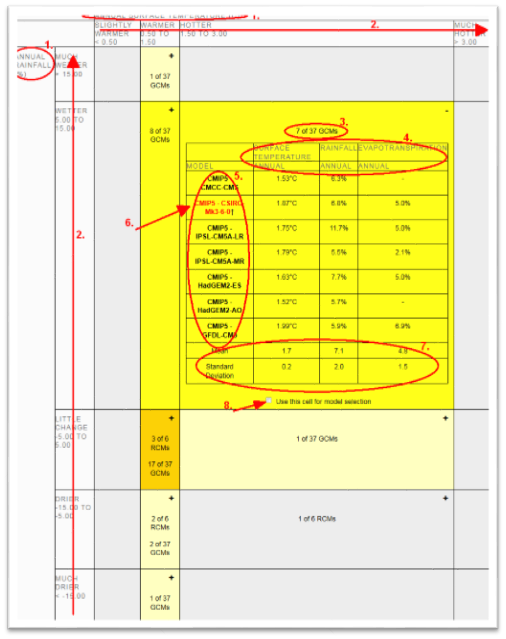 In many impact assessments it is not practical to evaluate the impacts for all climate models from each “climate future”. In such cases it is often appropriate to select one or two models suitable for your application. The “Representative Model Selection Wizard” is a tool for objectively selecting a climate model from a sub-set or “climate future” of interest.

button below the matrix. You will then be presented with the model selection wizard (Figure 8). 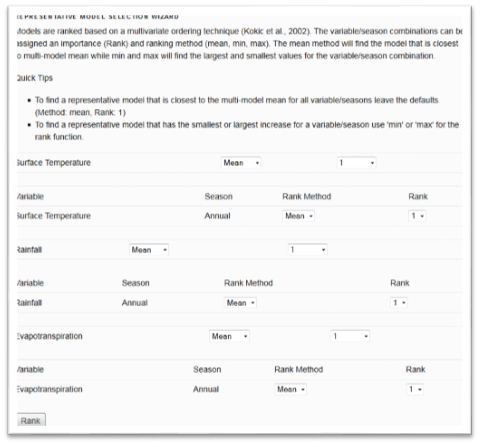 Once you are done, click on the “Rank” button at the bottom. You are then presented the ranking results for your chosen settings (Figure 8). You see that each model that fell into your chosen climate future and provided all desired variables is assigned a score. The climate model having the lowest score (at the top) depicts the most representative model based on your ranking criteria. 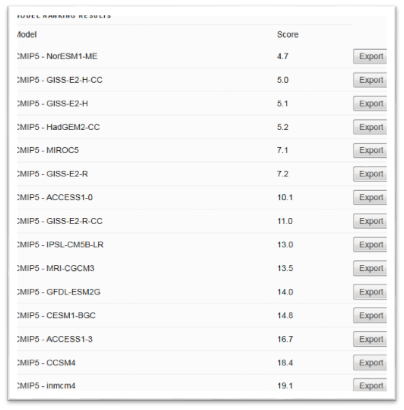 The “Export” button next to each climate model and score can be used to download data.

Once representative models have been selected for the climate futures of relevance to the impact assessment, the projected change values for that model can be obtained directly from Pacific Climate Futures. To export data, just click on the “Export” button in the Representative Model Selection Wizard (Figure 9).

Then, a download menu opens up providing the option to save a template Excel spreadsheet to your computer. This spreadsheet will look similar to the one shown in Figure 10. 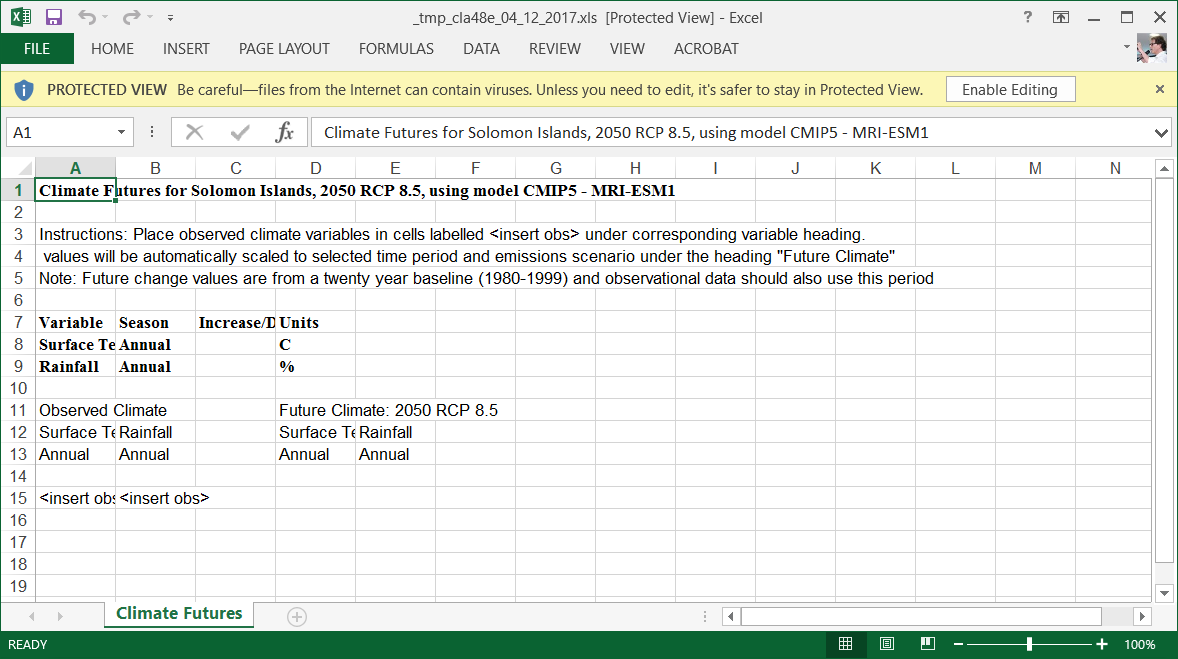 When first displayed, you may see a message at the top of the screen saying the spreadsheet is in "PROTECTED VIEW" - click on "Enable Editing" to show the data and allow you to work with the spreadsheet.  Note also that the spreadsheet has been given a temporary name. You should rename this to something meaningful immediately. For example, if the data are from the representative model for the 'Worst Case' climate future, you could name the file accordingly.

Enter your observed climate values in cells labelled “<insert obs>” under the corresponding variable heading. The values will be automatically scaled to the selected time period and emissions scenario under the heading "Future Climate” (columns D and E in Figure 10).

The spreadsheet can also be used as the basis for more advanced calculations. For example, if you have a time-series of annual rainfall totals and temperature averages, you can copy the formulas from the "Future Climate" cells and pasting them into the cells below. Then if you enter the annual values in columns (starting in cell A15 and B15 in the example shown in Figure 10), the future values will be calculated automatically and shown in the corresponding Future Climate cells. An example spreadsheet that has been edited in such a way is shown in Figure 11. 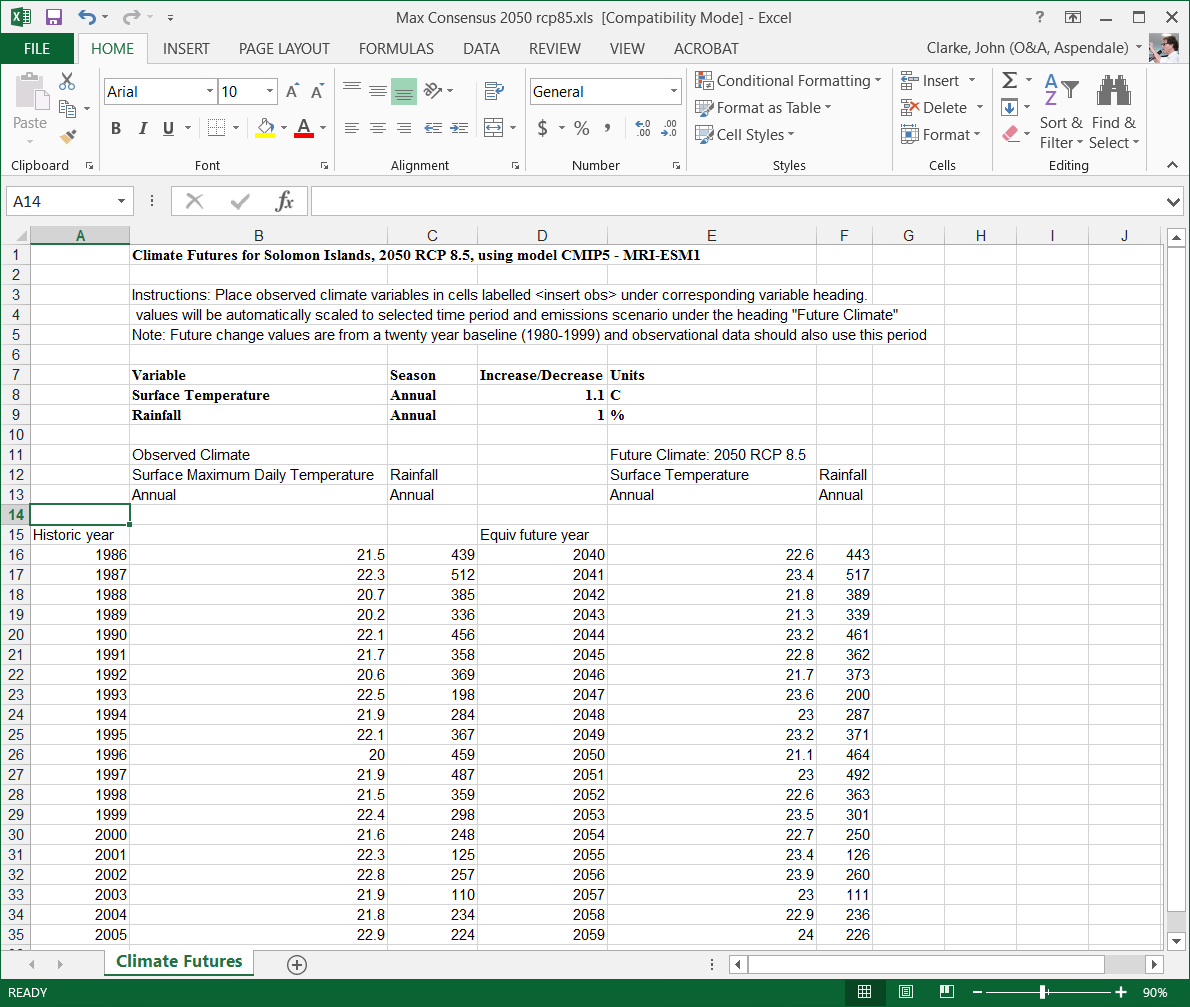 Figure 11. Example of an edited Excel Spreadsheet based on the standard export